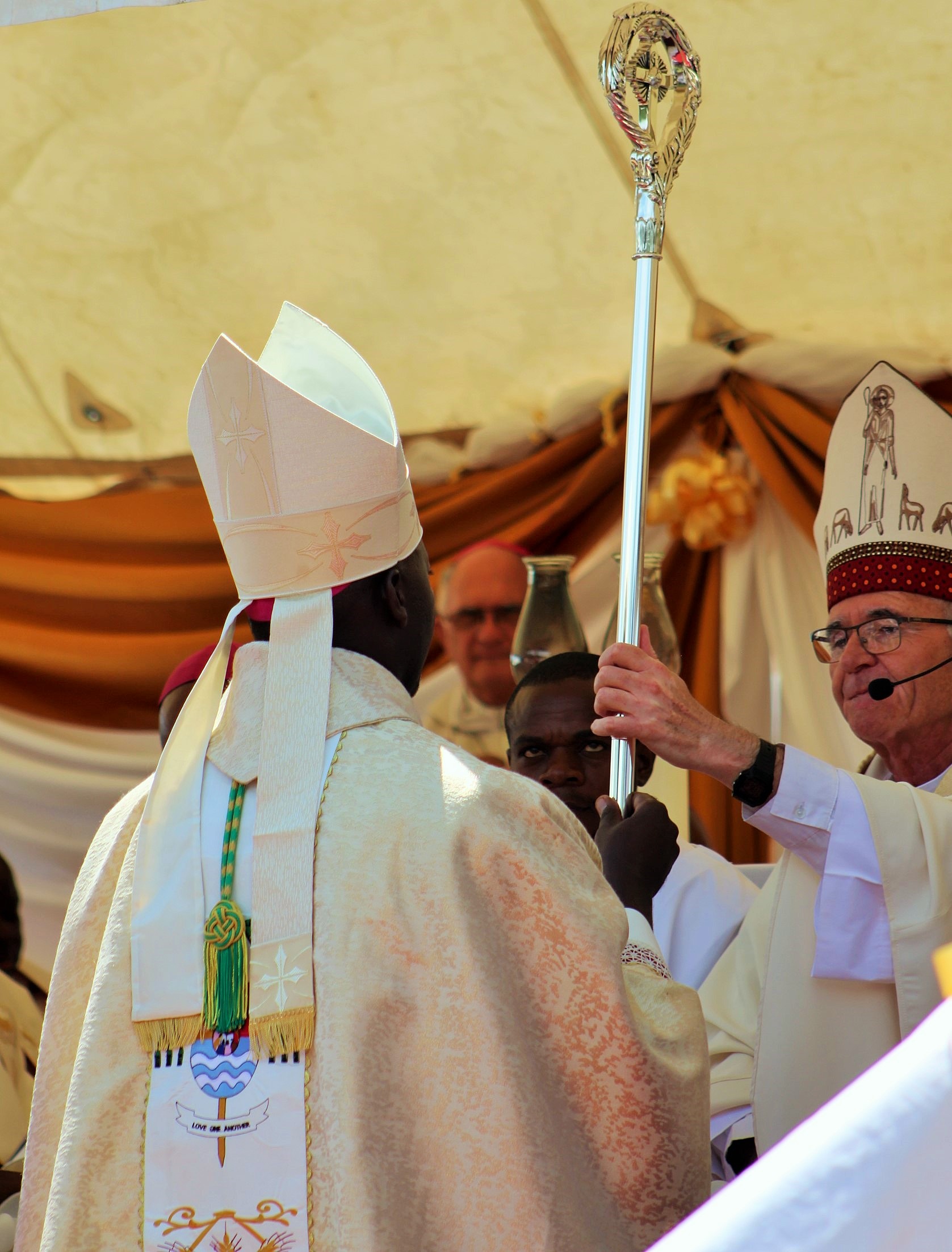 Bishop-elect Joseph Mary Kizito is officially the new bishop of the Catholic Diocese of Aliwal North.

The Ordination programme began on the evening of Friday 14 February in the Sacred Heart Cathedral.   Present were the mother and family members of the bishop-elect, bishops and priests from Southern Africa and Uganda, including the President of the SACBC,  Archbishop of Kampala and many religious and laity from parts of the SACBC region, Lesotho as well as a strong contingent from Uganda.  Archbishop Stephen Brislin of Cape Town took the place of The Apostolic Nuncio to Southern Africa, Archbishop Peter Wells, who had been hurt in an accident at home.

The solemn programme for the evening began with sung Vespers.  Bishop Michael Wustenburg, the retired bishops of Aliwal preached the homily.  Choosing the saints of the day Cyril and Methodius for his reflection, he said that they had been involved in enculturation in the early Church and had attempted to introduce translation of the liturgy into the vernacular. There had been opposition to their work but the Pope approved their vision.  Bishop Wustenburg also referred to Daniel Comboni, the founder of the Comboni Missionaries whose vision was “Save Africa with Africa.”  He said it was a blessing that Bishop Kizito will be the first African bishop of the Diocese of Aliwal North.  The challenge to him and the diocese is to remain true to the Universal Church.  Bishop-elect professed his faith and made his oath of allegiance to the Pope and the Church.  This was followed by a blessing of his mitre and insignia and the renewal of vows of the priests of the diocese.

Supper was served to all by the diocesan team and the Ugandan participants gathered for a special celebration.

The Liturgy of the Episcopal Ordination on Saturday was celebrated at the Sauer Park Stadium.  As was to be expected there was much joy, music, movement, jubilation and a greeting by a praise singer.    The liturgical parts of the service were in English but much of the music and some readings were in the vernacular or sung by a Ugandan choir.

Bishops from Southern Africa, Uganda and Lesotho, some 300 priests and as many religious as well as an estimated 4000 people attended, many dressed in traditional costumes and sodality uniforms.  Pride of place again was given to the family of bishop-elect Kizito. The costumes of the Ugandan women were particularly beautiful.  Invited guests were members of other religious communities and the Ugandan ambassador were also present.

During the rite of ordination the Mandate from the Holy See was read, and the bishop-elect was presented to the gathered community who gave their consent.  The Promise of the Elect was led by Archbishop Brislin requesting the resolve of the elect to discharge his duties faithfully.  His response: “Ndizimisele! (I do)”   was spoken loudly with confidence. This was followed by singing of the Litany of the Saints in Sesotho, laying on of hands by the gathered bishops, placing of the book and presentation of the Gospels, investiture with ring, mitre and staff and the joyful presentation of their new bishop to the people.

Bishop Sipuka based his homily on the 1st Reading of the Day from the book of 1 Kings chapter 12.  This challenging reading in which the people were led astray by king Jeroboam who made golden calves for them to worship and turn away from the true God. Bishop Sipuka warned Bishop Kizito to be vigilant on the question of worship, turning to idols of money and greed as not to abandon their Catholic faith.   He concluded with a call, “This diocese with Jesus, not a god made in our own image.”

The day’s proceedings continued in celebratory mode with a procession of gifts, some liturgical dance and well into the afternoon after lunch.

The First Holy Mass as Bishop of Aliwal Diocese was celebrated at the Sacred Heart Cathedral in Aliwal once again in the presence of many members of the diocese and visitors, those from Uganda and some accompanying Bishop Wustenburg from Germany.

A moving moment was his formal entrance into his cathedral accompanied by drums.   The homily was preached by Archbishop Cyprian of Kampala.   He referred to the relationship between Uganda and South Africa, his joy at the ordination of one of the Kizito clan and gave a message of encouragement to the people of Aliwal diocese and their new bishop.

Bishop Joseph Kizito has been simply known as Father Joe to parishioners in the parishes and projects such as youth and HIV/Aids in which he has worked in the diocese since his ordination.   In the programme for the First Mass the bishop expresses gratitude to everyone who has participated in the celebration, making it a memorable and homely event. He asked for their prayers and concluded, “May the giver of life, bless you all.”